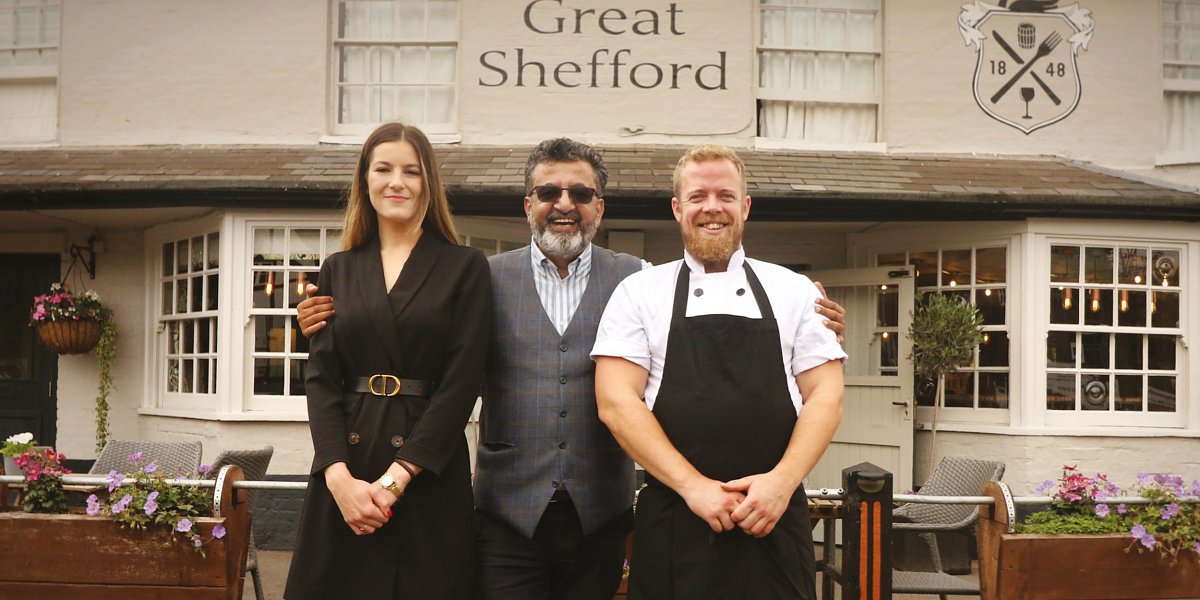 From a penniless migrant to a motivational multiple pub operator, this is the story of Joshua Khan’s J and G Pubs Ltd.

Joshua Khan is not your ordinary pub landlord. He’s from Siberia, but has a dominant Indian disposition and accent, something he inherited from his father’s side of the family. He’s a commanding presence, but equally gentle in tone and delivery. He’s the owner operator of three Berkshire pubs, but trained as a doctor. Like I said – he’s not your ordinary pub landlord.

Twenty years ago, with less than £600 in his pocket, Khan left Siberia in search of a better life for his young family. While the reasons for flying across the world were multiple, the racism he experienced on a daily basis was a huge contributor to the move and still clearly darkens his memory – racism is a topic that repeatedly returns during our conversation at The Great Shefford pub last month. But, as you’ll soon read, such abhorrent ideologies have far from deterred Khan’s hospitality journey.

Upon arrival in the UK, he couldn’t afford to re-train in medicine, but eventually landed a role at NatWest. At the time, while renting a room in London, he tells me he couldn’t even afford to buy a bus pass for him and his wife.

“We had to walk 15 miles a day to work instead,” he says with his thick Indian accent, wide eyes and a beaming smile. “Sometimes in the evening, on the way back to the rented room, I would stop in Clapham and look through restaurant windows at the white tablecloths and couples holding hands over dinner. I would think that one day I would open my own restaurant.”

What he didn’t know back then was that the role at NatWest would ultimately lead to that opportunity. It was there where he was offered a restaurant job by one of the bank’s customers. Soon after that, his major breakthrough came when he got to work with acclaimed French chef Ollie Couillaud, with whom he helped launch The Lawn Bistro in Wimbledon Village. However, despite how influential the experience was on Khan’s food and hospitality voyage, the issue of race once again presented itself during his time at the restaurant.

“The saddest thing was that because of my appearance, given my Indian origin, owners thought I shouldn’t be on the floor,” he says. “That was hurtful. They were quite direct about that – wanting French or English people out front. I was being judged by the colour of my skin.”

Unsurprisingly, Khan quit, brokenhearted that people thought he “wasn’t worthy of hospitality”. Down but not defeated, he knew he needed to run his own project, which is how he entered the pub business.

Joshua Khan at The Great Shefford

Under the Greene King Local Hero model, Khan took on The King Charles pub in Newbury, with the help of a £15,000 loan from the bank. It became a runaway success and was to be the foundation of J and G Pubs Ltd, the business that now consists of The King Charles, The Broad Face in Abingdon and The Great Shefford, near Hungerford. The latter, where we meet over an impressive lunch, has recently undergone a £1m refurbishment and boasts the head chef services of Sam Cary, formerly of Tom Kerridge’s Hand & Flowers in Marlow. Khan is currently looking for a fourth premises to add to his growing portfolio. It’s fair to say he is ‘worthy of hospitality’. Did he envisage such growth from day one?

“The Broad Face in Abingdon made us so much money that we got this pub,” he says, gesturing towards The Great Shefford’s dining room. “But here, everyone told me not to take it. In 20 years, it has had 17 landlords. Enterprise [Ei Group] couldn’t find someone to make it work, but to be fair no one has spent a pretty penny on it – so far, we have spent nearly £1.2m.

“We wanted to do hearty, honest food here. It worked well until Covid hit and then everything stopped. When we opened, we budgeted for a £500,000 turnover. After six months, we were on track to take £1.2m. Since we were forced to close, we have been working our way back up to £1m a year. I think this pub can do £3m a year, though.”

Khan shows me around the pub, highlighting details on where the investment has gone, responding multiple times to regulars arriving for their lunch. “Good afternoon, Mr Khan!” an elderly gent says as he takes his seat and menu. “Hi Joshua,” says another. Years on from being told not to work the restaurant floor, he is now host extraordinaire, giving all that he can to the literal sense of hospitality in his venues. Do the memories of his first restaurant job still haunt him? I ask if he still experiences similar stereotyping in his Berkshire surroundings.

“Most English people don’t care who you are as long as you’re doing a good job,” he says. “Until you’ve lived in Russia like I did, you just don’t know what racism is. In one year in Russia, I was stopped for document checks 365 times. I was living in hell. We don’t realise what we have here – yes, we’re not perfect, but we’re very good. Yes, I’ve been punched by people in the pub, racially abused too. But it made me stronger. I can’t let these little people stop me. They are a tiny minority, trust me.”

Dining at The Great Shefford

Race issues lead our conversation to the magnificent multicultural mix of people that make up the hospitality workforce across the country. Khan points to his team as they work a busy lunch service, listing each individual’s nationality. “We’re a family, irrespective of where we’re from,” he says. Being a clear advocate of immigration means his frustration with the post-Brexit staffing crisis is even greater than the average operator. “Government talks about saving the pubs, but how can we when things like this exist?” he says. “Let’s save the pubs, but let’s put restrictions in so foreigners can’t come here and work. As a foreigner, where is the first place you go to get a job? Hospitality. We can’t go on like this.”

And yet, J and G Pubs Ltd has a pretty decent staff retention rate. Khan explains how chefs are very hard to come by, but his front-of-house team average over five years employment across the business. That’s pretty good going for a three-site multiple in Berkshire. So, how does he do it? Well, for key members of the team, he offers part ownership of the business. In fact, the ‘G’ in J and G Pubs Ltd is taken from Georgiana Caras (pictured above), a manager who is now a director in the company. After years of loyal service, she co-signed an initial lease with Khan (the ‘J’ in the equation) and took a stake in the organisation.

“Everyone should own some of the business they have helped develop,” he declares. “Why is the industry in trouble? Because of greedy landlords and owning companies. They want to make more money and give nothing back. My business model is to share the wealth with the teams – they should own the place. So, for example, a junior business partner could take 10% of the business. Another maybe 2%. It’s site-specific, but if that same team helps open another pub, they will own more.”

I ask if such a model is sustainable. Won’t there come a time when he has given up the entirety of his estate?

“At some point, I will earn half what I’m earning,” says Khan. “But they will be doing half of the job I’m doing now. Isn’t that fair? Give people some of the business. People need the right amount of money and the right amount of love. It is cheesy, but love does wonders.”

While Brexit and Covid-19 have done little to help the long-term appeal and credibility of careers in the hospitality sector, Khan is a passionate believer in changing a perception that has been a restrictive problem for the on-trade for decades. His business partner approach is just one solution to making pub employment more attractive for those pondering which career path to take, but he stresses more needs to be done by the entire industry.

“If people join hands in the hospitality industry, it could become a much more vibrant market for the UK economy in which people would stay and build careers, where it isn’t something just to fall into when you can’t find a role somewhere else.”
What does he mean by “join hands”? I point out there are trade bodies doing an admirable job at representing the sector and pushing for improvement in myriad areas.

“It needs to be more than that,” he concludes. “It needs to be about the people. There should be leading publicans showing everyone how it’s done. There should be a leading organisation to work on these goals. People like Kerridge and Ramsay should join hands, sit down, write a code of employment and make a standard for the industry. Our 16-year-olds are getting higher pay than many other places. That’s why we have a very stable team here. I employ around 40 people and I feel good about being adopted by a country and doing something good in return.